For April’s installment of Galactic Terrors, HWA-NY is doing a special collaboration with scf-fi and fantasy conventions, HELIOsphere and FilKONtario! Join us online at 8 P.M. EDT for a fantastic program featuring readings from Ryan Aussie Smith, Randee Dawn, Teel James Glenn, and Amy Grech! After the reading, our guests will join up for a group Q&A, where viewers are encouraged to chat and ask questions!

Galactic Terrors will be broadcast monthly on the second Thursday of the month, 8 p.m. EST and episodes will be archived on YouTube for future viewing.

Our next Galactic Terrors reading will take place on Thursday, February 11, at 8 p.m. EST. featuring Meghan Arcuri, Nicole Givens Kurtz, N.R. Lambert, and Kaaron Warren! Click here for the link and to set a reminder.

Oliver Baer’s poem “#94” appeared in DM (Danse Macabre) du Jour on December 17th and his poem “#98” was chosen for the collection Goodreads Best Poems 2020. Baer’s poems also served as inspiration for the band, Lucky Witch and the Righteous Ghost, who based four of the five songs on their new EP, Dreams in the Witch House, on Baer’s work.

Tune into Cursed Morsels to hear what Amy Grech has to say about horror, noir, Ray Bradbury, and the perils of technology! Then, check out Scare You To Sleep to experience a chilling rendition of Grech’s post-apocalyptic cannibalism story, “Fallout.” Finally, head over to Girl Meets Monster for an interview with Grech, as she chats about all things horror, and to read her flash fiction piece, “Midnight Munchies.”

The inaugural installment of Galactic Terrors kicks off on Monday, September 14th at 8 p.m. EDT, with Marc Abbott, Teel James Glenn, Amy Grech, and Lisa Morton! Following this specially scheduled premiere episode, Galactic Terrors will be broadcast monthly on the second Thursday of the month, beginning on October 8th, with episodes archived on YouTube for future viewing. 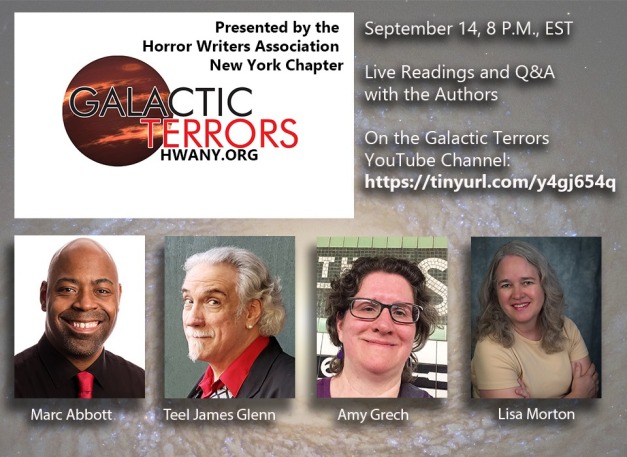 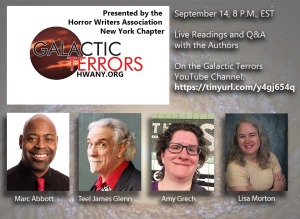 “Page 11” is a song based on a poem in Oliver Baer‘s book of poetry and photographs, Baer Soul. It is on Jay Ackley’s new album Songs My Friends Wrote, Vol. 2, the cover of which also includes an artistic rendition of Baer. Baer, with his true face on, read his H. P. Lovecraft-inspired poems as part of his Facebook Live reading around Lovecraft’s birthday in August.

Ellen Datlow‘s The Best Horror of the Year: Volume Twelve will be published October 6th by Night Shade Books and is available for preorder now. 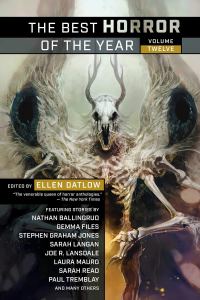 To celebrate the release of Don’t Turn Out the Lights, N.R. Lambert joined editor Jonathan Maberry, and co-authors, Amy Lukavics, Kim Ventrella, and James A. Moore for a conversation about horror, writing for younger readers, and the legacy of Alvin Schwartz’s Scary Stories to Tell in the Dark. Mysterious Galaxy Bookstore hosted the event and shared a recording of the panel on YouTube. 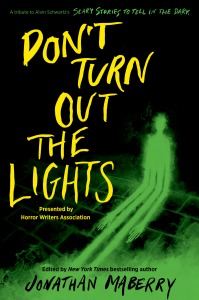 Robert P. Ottone’s story, “Elevator of the Dead,” is featured as Episode 13 of The Night’s End podcast.

In October, Ottone is hosting a number of online readings and events in support of his new short story collection, Her Infernal Name & Other Nightmares.

The dates and locations are as follows: 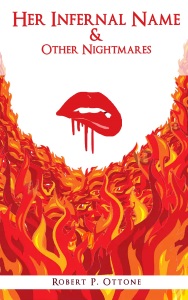 Before an emergency appendectomy interrupted his usual flow, NY chapter’s Steven Van Patten‘s short horror story, “Pink Lake,” landed in the Nightlight Podcast, curated by horror maven Tonia Thompson. Additionally, “The Retiree,” a SVP short about an elderly monster killer having one final go at it, will be included in Nicole Givens Kurtz’s much-anticipated anthology Slay: Stories Of The Vampire Noire, which releases on October 13th. And SVP’s latest animated piece, this one about the famous Harlem Hellfighters of World War I, is set to premier to Extra Credits‘ 2.42 million subscribers on YouTube on September 10th. (As for the appendectomy, we hear he is recovering just fine, but will happily accept red wine and dark chocolate as get well gifts.)
[Editor’s note: 5 out of 5 doctors agree buying an author’s books improves surgical recovery!] 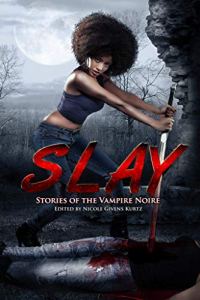 Teel James Glenn’s short mystery “Reindeer Games” will appear in the anthology Whodunnit NJ, his poem, ‘They Slumber’ will be published in the forthcoming HWA Poetry anthology, and his short story, “Screen Shot,” appears in the July issue of Mystery Weekly.

Carol Gyzander will be reading at the Words From Beyond The Coffee House Of The Damned Monthy Reading on Wednesday, July 15th at 7:00 p.m. 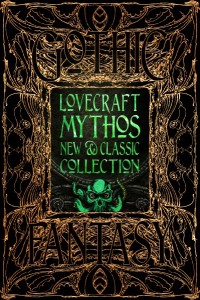 Robert P. Ottone’s book, People: A Horror Anthology About Love, Loss, Life & Things That Go Bump in the Night is now available as an audiobook via Audible and Apple Books! Ottone’s story, “The Last of the Leading Men,” will be featured in the Deadman’s Tome anthology, Hollywood Holocaust. 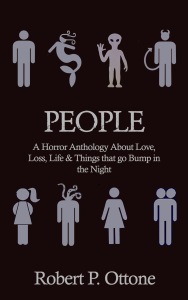 In light of the recent political unrest brought on by the deaths of George Floyd, Breonna Taylor, and many other unarmed African-Americans, Steven Van Patten was recently asked to bring some Black History to the Extra Credits YouTube channel. His first piece for the series focuses on the Tulsa Race Riot, “The Burning of Black Wall Street,” and will be followed by at least five more written by Van Patten.

HWA-NY READINGS: Due to the global pandemic and related shutdowns/restrictions, HWA-NY’s planned readings (Night Terrors and Summer Dark) are shifting into a new, terrifying form. Ignore any howling and keep an eye out for updates here, on Facebook, and on Twitter. 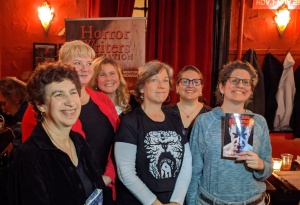 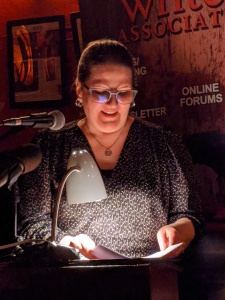 Amy Grech debuted a new work-in-progress, reading a chilling excerpt from “Skin in the Game.” 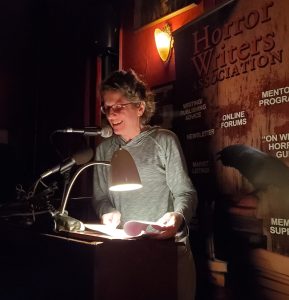 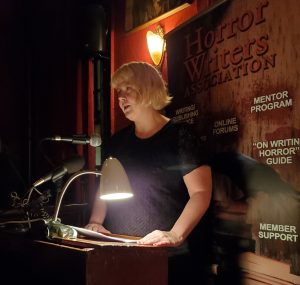 After the raffle, which included stickers by artist Lynne Hansen, the reading continued with James Chambers introducing the second half. 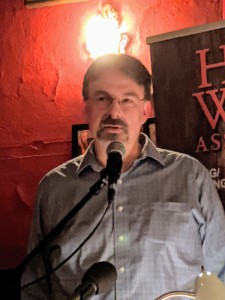 Carol Gyzander read an excerpt from “Deal with the Devil,” which appears in Across the Universe: Tales of Alternate Beatles, edited by Michael A. Ventrella and Randee Dawn (Fantastic Books), a new Beatles-themed anthology that Library Journal raved “will move and surprise you” in its recent starred review. 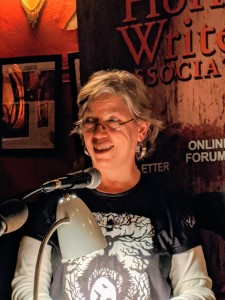 Carol Gyzander reading an excerpt from “Deal with the Devil” and sporting a shirt by artist Cat Scully. Photo credit: Jim Freund.

Randee Dawn read “Cat Person,” a short story from the forthcoming anthology, Horror for the Throne: One-Sitting Reads, edited by James D. Macdonald, Judith K. Dial, and Tom Easton, which will be published by Fantastic Books later this year. 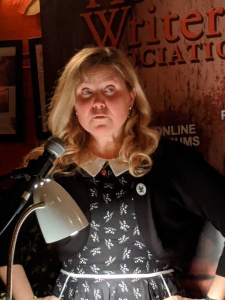 Barbara Krasnoff closed out the evening with a haunting story, “Rosemary, That’s For Remembrance,” which originally appeared in Clockwork Phoenix 2 (edited by Mike Allen, Mythic Delirium Books), and is also included in her recent mosaic novel, The History of Soul 2065 (Mythic Delirium Books), which Publishers Weekly recently praised in a starred review: “Powerful and dreamlike, this intergenerational meditation on family, mortality, and hope is far more than the sum of its parts.”

Special thanks the sound team, Gordon Linzer and Vincent Collins who both recorded the reading. When selections from this reading are made available online, we’ll be sure to post an update here. 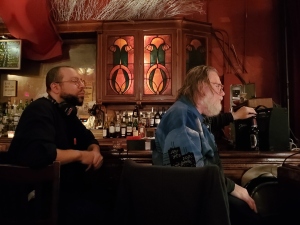 A huge thanks to the KGB Bar team, to Teel James Glenn (who manned the door and the raffle sales), and to artist Kristine Scheiner, who sketched all the readers (and our emcees) during the event. (Be sure to check out Kristine’s shop on etsy.)

The biggest thank you of all to everyone who came out to the reading and helped us celebrate Women in Horror Month! 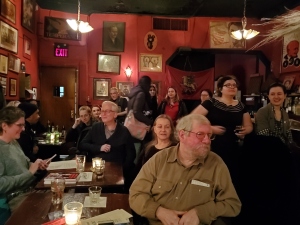 Come out to Otto’s Shrunken Head for a night of horror readings with the New York Chapter of the Horror Writers Association!

On October 15, at 8 p.m., local horror authors will read chilling excerpts from their books! The event will include book signings, trivia questions, and book giveaways. There will also be a special presentation of a brand-new horror subscription game, The Haunted Box, with the game-makers giving demos to all who attend. Join us if you dare! 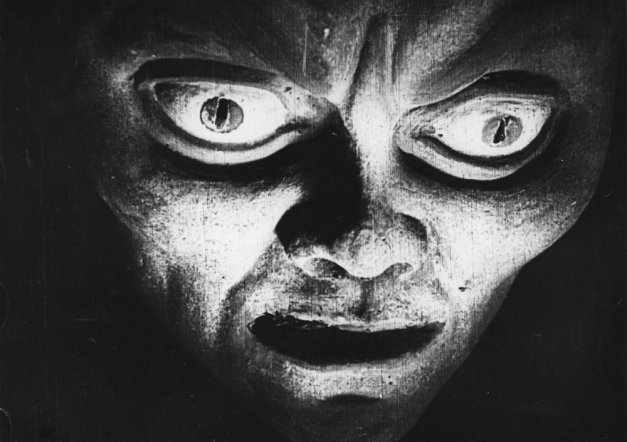 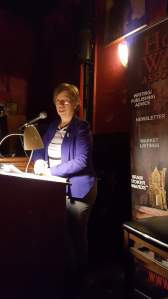 CAROL GYZANDER writes and edits for Writerpunk Press, which creates anthologies of various genres of ’punk stories based upon classics. Her stories include a cyberpunk Macbeth, a clockpunk “The Raven” and a cyberpunk Lovecraft story inspired by “The Colour Out of Space.” Her latest short story sale is “Deal with the Devil” to Across the Universe, the alternate Beatles anthology edited by Michael Ventrella and Randee Dawn, coming out in December from Fantastic Books. Find her at CarolGyzander.com or follow her on Twitter @CarolGyzander

OLIVER BAER was the editor of Cthulhu Sex Magazine and Two Backed Books. His writings have been included in Cthulhu Sex Magazine, Dream People, Bare Bone, Infernal Ink Magazine, Horror Between the Sheets, Horror Writers Association Poetry Showcase Vol. II, Hell’s Bells: Wicked Tunes, Mad Musicians and Cursed Instruments, Hell’s Heart: 15 Tales of Love Run Amok, and Writing in Darkness. His book of poetry, Baer Soul came out in 2011. Recently, he has been appearing in other media such as film and radio. He is visible using the virtual spectrum of social media by following him on Twitter @obaer and/or Facebook.

STEVEN VAN PATTEN‘s Brookwater’s Curse trilogy features an 1860s Georgia plantation slave who becomes law enforcement within the vampire community. His Killer Genius series is about a hyper-intelligent black woman who uses high-end technology as a socially conscious serial killer. His short fiction includes contributions to horror anthologies like Hell’s Kitties and the Stoker Award nominated New York State of Fright. A collection of short horror and dark fiction stories entitled Hell At The Way Station, published by Laughing Black Vampire Productions and co-authored by acclaimed storyteller, Marc Abbott hit shelves in 2019. He has been nominated for four African-American Literary Awards. His website is www.laughingblackvampire.com.

MEGHAN ARCURI writes fiction. Her short stories can be found in various anthologies, including Chiral Mad (Written Backwards), Chiral Mad 3, and Madhouse (both from Dark Regions Press). She also has a story in the forthcoming Borderlands 7 (Borderlands Press). She is currently serving as the Vice President for the Horror Writers Association. She lives with her family in New York’s Hudson Valley. Please visit her at meghanarcuri.com, facebook.com/meg.arcuri, or on Twitter. 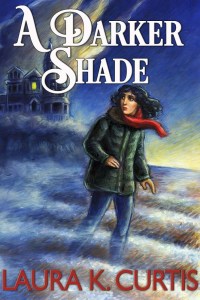 LAURA K. CURTIS gave up a life writing dry academic papers for writing decidedly less dry genre fiction. A member of RNA, MWA, ITW, and HWA, she has trouble settling into one lane. While she is best known as a writer of romantic suspense, she has also written contemporary romance novels and short crime fiction. A DARKER SHADE is her seventh novel, her first gothic and her first suitable for YA as well as adult audiences. Laura lives in Westchester, NY with her husband and a pack of wild Irish Terriers.

We’re excited to announce that HWA-NY’s popular outdoor reading series, SUMMER DARK, is back for 2019!

On select Friday nights in June and July, Summer Dark will feature three authors reading from their work at the Oasis Community Garden on West 52nd St., between 10th and 11th Avenues, from 6:00 P.M. to 8:00 P.M. 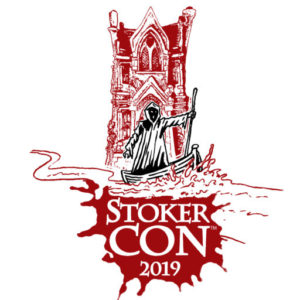 Lo! StokerCon 2019 is nigh and the New York chapter of the Horror Writers Association will be descending upon Grand Rapids, Michigan to partake in readings, panels, screenings, and signings at horror’s premier event. Here are just some* of the HWA-NY members representing at StokerCon 2019.

To see all of the weekend’s excellent programming, visit the StokerCon 2019 Sched page!

*If you are an HWA-NY member and missed our call for your StokerCon info, please feel free to add your Sched link in the comments below. 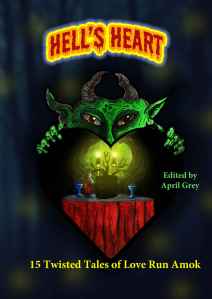 HWA-NY Presents: Hell’s Heart at KGB Bar. Join us for an evening of horror stories and entertainment to celebrate the anthology, HELL’S HEART, edited by April Grey.

There is a two drink minimum and the event will include giveaways, author signings, and a raffle.